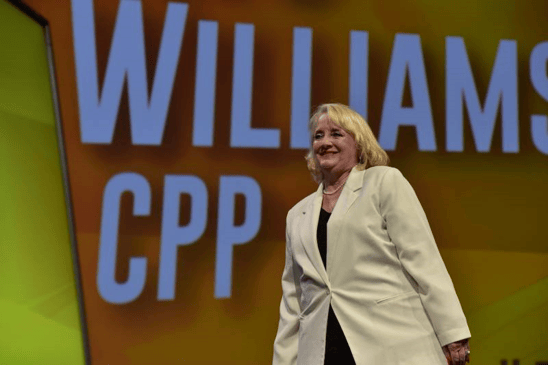 At the 37th Annual Congress in Long Beach this week, Hope was awarded with a crystal boot for her service to the organization and its members. While she is looking forward to spending time with her husband, David, and grandson, William, she says she will miss her payroll family.

“The entire APA organization is known for its professionalism, but it is also the most compassionate, caring group of people I’ve ever had the opportunity to work with,” Williams said. “They celebrate each other’s successes and support each other in ways I don’t often see in other organizations.”

Williams joined the APA and the Atlanta Chapter of the APA in 2000, ordered a study book (now known as Payroll Practice Fundamentals) and earned her Fundamental Payroll Certification (FPC) the first time the exam was offered that October. She continued with her payroll education and earned her Certified Payroll Professional (CPP) designation in 2002.

Williams’ dedication to education, training, and her love of volunteering at the Atlanta Chapter made her stand out to influential APA staff.